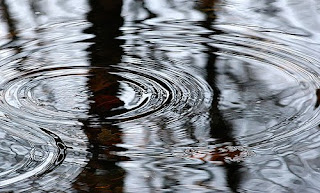 In Geography, we talk about the "fundamental laws" - like in physics - which are stated as:
Another way of saying this is: "distance matters". A lot of geographic analysis is based on measuring how well stuff either follows these laws, or, often more interesting, how stuff doesn't follow the law. What is immediately around you profoundly effects you - and you can have a measurable effect on your immediate neighborhood too. So I've been thinking about this because of bread.

I talked about our bread project on the blog the other day. The one where with the application of long, luxurious time, one can build a beautiful complex bread out of just a little yeast, flour and water. Well, I'm here to confess that it was a bit of a failure - mostly due to how unusually cold it is outside! Our yeast never did take off, which I guess is kind of an example of a lack of a ripple effect (note: we will persevere with another attempt tomorrow - stay tuned).

But, never worry, the day is saved (or dinner is saved anyway) by the great news I got from my "coach" and Nurse Practitioner Carol Jacoby at OHSU today: that I'm healthy enough - with sufficiently high blood counts - to be able to bend the "low bacteria diet" rules a bit. Specifically, I told her that I live just blocks from a really good bakery (the Fluer De Lis in Hollywood), and, could I possibly get baked goods from them? (The rules of the diet says that all bread has to be prepared in "commercial facilities and covered in cellophane or plastic wrap"). She also allowed that getting an espresso at a coffee shop was also OK under her interpretation - they are pouring boiling water over the beans after all!

Anyway. Julie and Carol went shopping for dinner, and stopped in at the bakery to pick up my favorite Olive Ciabatta. Turns out they were out of them - or rather - that they only make them on weekends now because, as Heather, our familiar cashier said: "since your husband isn't coming in every night to get his loaf". She then asked about me, and how the Bone Marrow Transplant had gone.... Somehow, through the local grapevine, my bakery learned what I was going through (I'm pretty sure I didn't tell them). How they found out I'm not sure - but we have a pretty tight neighborhood and the bakery is a natural gathering spot for folks. Oh, and, it is the closest one to my house.

So maybe this is kind of a little slice of "It's a Wonderful Life" where I'm seeing what the effect of my life has on the city and the local economy ... GASP! No Olive Ciabatta on Weekdays! (picture Jimmy Stewart stumbling out of the bakery wide eyed and desperate...running in his rumpled suit - arms and legs flailing - down the dark, snowy - black and white only - streets)

We all have a ripple effect in our universe of family, friends, neighbors and all our associations - some of them are emotional, some more practical, some are economic, some biological (cover your mouth when you cough!) - or usually some mysterious combination of these.

(Come to think of it, I better check in on the bartender at Moon and Sixpence - he's is probably scaling back a bit lately too...)

Ripple by the Grateful Dead. I've never been a "deadhead" particularly, but, really, is there a sweeter song to go with this theme? I like this live version a lot - Gerry's solo guitar starts to really soar toward the end, and, the vocals are so sincere and, while not perfect, certainly earnest.

The area of interest is at the intersection of 2 or more map sheets.
Posted by Mark Bosworth at 6:31 PM